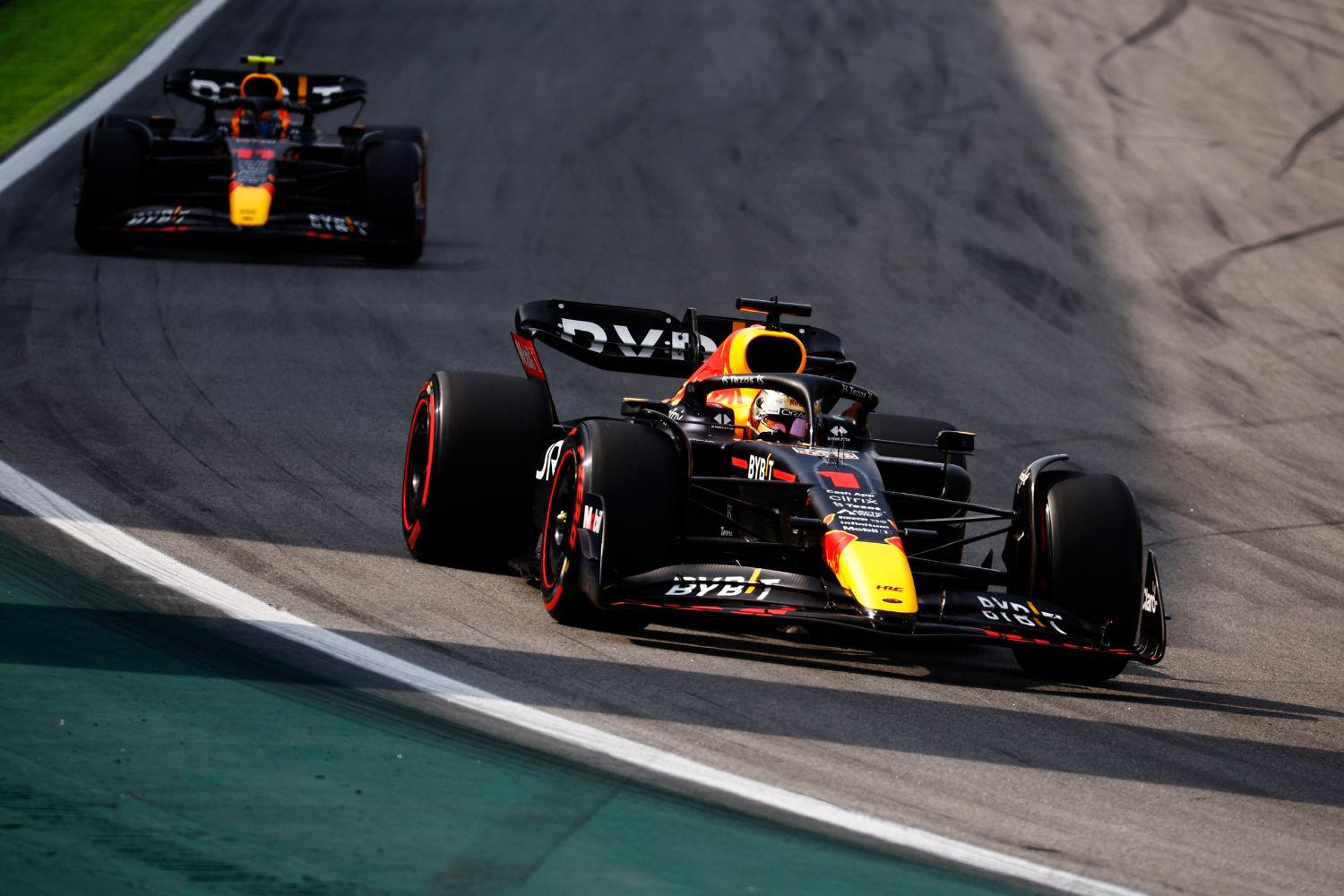 Oracle Red Bull Racing’s Max Verstappen and Sergio Pérez endured one of the toughest days of the 2022 Formula 1 season in the São Paulo Grand Prix, where the pair finished sixth and seventh at Interlagos to end a run of 19 consecutive Grands Prix for the team.

After starting the race from third and fourth on the grid, contact with Lewis Hamilton on Lap 7 whilst attempting a pass in the first turn damaged Verstappen’s front wing, necessitating a pit stop that dropped him down to 17th place. A further five-second penalty for the incident made Verstappen’s drive back through the field even more difficult.

Pérez held down a podium position for most of the race, but following a late safety car Pérez dropped back through the field from third as the race entered the final 10 laps.

He was passed by Verstappen with four laps remaining to finish sixth and seventh, as Mercedes driver George Russell claimed victory for the first time.

With only the Abu Dhabi Grand Prix left to run, Pérez is now tied with Ferrari’s Charles Leclerc on 290 points for second place in the 2022 Drivers’ Standings, setting up a thrilling final race that could net Oracle Red Bull Racing a 1–2 overall, as well as the Constructors’ Championship.

Scuderia Alpha Tauri also had a difficult race, with Pierre Gasly crossing the finish line in 12th, but dropping to 14th after receiving a five-second penalty for exceeding the pit lane speed limit, while Yuki Tsunoda finished the race in 17th place.

“We had no pace again today, similar to yesterday – we were sliding too much and we had bad degradation, so it was hard to attack. I didn’t quite understand the five second penalty for the incident with Lewis, but it didn’t affect the race too much as we already lacked pace. We’ve discussed internally as a team the matter between Checo and myself and have moved on as a team. If he needs the help and there’s a chance to help him in Abu Dhabi, then I will be there and I will, of course, support him. We’re fighting for first and second in the Drivers’ Championship, so we’ll work hard to achieve that.”

“I’m a bit surprised by our performance today. We were very slow on the medium tyre and also on the soft. I was competitive, but as soon as we switched, I couldn’t defend. I lost more positions due to the Safety Car and without that I think I could have finished third or fourth. We were definitely down on pace this weekend, so I really hope we can go back to our usual form next weekend in Abu Dhabi. I’m obviously disappointed with what happened today between Max and myself. It is something we have discussed internally, we will move on and keep working together as a team. I’m sure if I need support in Abu Dhabi, it will be different and going forward we will always put the team first.”

“We haven’t often left a Grand Prix weekend this season feeling disappointed. Coming away from Brazil with P6 and P7 is far from the standards we have set for ourselves this season. The main issue for us was our pace. George drove very well all weekend and the various updates Mercedes have been bringing throughout the year has seen them get quicker and quicker. We need to understand why we gave away performance this weekend and will come out firing on all cylinders in Abu Dhabi.

Regarding Max and Checo, we have discussed the matter internally and we go into Abu Dhabi as a team to do the very best that we can to help Checo achieve second place in the Championship. Max is supportive of that. Ultimately, we work as a team and race as a team. It is that ethos that has seen us gain such great success this season and will continue to drive us forward.”

“I gave everything I could today and I’m happy with my performance, it’s just frustrating not to be able to fight for points. I had a strong start and was able to get up to P9. We were quite competitive on the Softs, but then on the Mediums we struggled. I fought as hard as I could, but we just did not have the pace and there wasn’t much we could do this afternoon. We’ve got one last opportunity to score points in Abu Dhabi and hopefully finish the season in eighth. It’ll be my last race for the team, so it’ll be an emotional one and I hope we can finish our journey together on a high.”

“After the changes ahead of the race the car felt slightly better, but I still wasn’t that comfortable in it and we didn’t have the pace today. Normally, you’re able to unlap yourself under the Safety Car, but today I was told to stay in my position, so we ended the day a whole lap behind the pack, with no opportunity to make my way forward. It’s been a difficult weekend, so we need to go away and investigate why we’ve struggled so much ahead of the final race in Abu Dhabi next week.”

“It was a difficult afternoon for the team. Yuki struggled for the majority of the weekend to extract competitive lap times from the car, so we took the difficult decision to change the setup and start from the pitlane. Although the changes did give him a better feeling, it wasn’t enough to allow him to move forward and challenge for points. For reasons that we still need to clarify he couldn’t unlap himself, so not only was he a lap down, but he got the blue flags from everyone and therefore this put pay to any chances he had to overtake some cars at the end to finish only 17th. Pierre was holding his own at the start of the race, but with that pace our tyre degradation was high, and we had to convert to a three-stop strategy. Even with the extra stops and fitting the new tyres, we didn’t have enough pace to get inside the top 10, although we crossed the line within 3.3 seconds of P10. The five second penalty for speeding in the pits dropped us further down, rounding off what has been one of the more challenging races of this season. In any case, we will regroup before Abu Dhabi, push hard and do all we can as a team to score points in the final race.”

Verstappen rewrites the record books with victory in Mexico